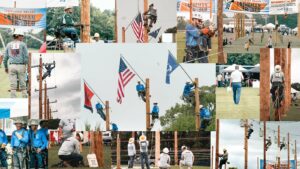 The 2021 Tennessee Valley Lineman Rodeo, hosted by Jackson Energy Authority, kicked off on Friday, September 17 in Jackson, Tennessee for two days of friendly competition and awards. Lineman apprentices, journeyman teams of three, individual linemen and senior individuals came together to showcase their skills and knowledge within their field.

Linemen competed in various events depending on their category including:

The winning linemen were recognized at an award presentation, which was held virtually in lieu of an in-person gathering due to COVID-19 precautions.

Each of the winners in the Overall Journeyman category are from Middle Tennessee Electric with first place going to Logan Barber, followed by Adam Montgomery in second place and Billy Jack Alexander in third place.

You can play back the awards ceremony livestream to see the full list of award recipients by clicking here.