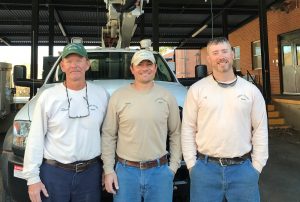 What started out as a routine run for three Athens, Tenn., UB linemen turned out to be anything but.

Athens UB journeymen Abe Aziz, Josh Finnell and Dickie Slack were headed out to replace street lights Nov. 27 when they saw a house engulfed in flames – and another house, 10 feet away, about to ignite. The occupants of the first house had escaped, but two adults and a child were trapped on the roof of the second house.

Scant minutes later, the linemen had rescued the stranded trio – and just in time.

“There was a burning mattress blocking the exit,” Finnell said. “Those people were going to jump off that roof, because that [second] house would have gone up in another five minutes.”

When they stopped at the fire, Slack moved quickly to cut power to the two houses, so as to protect the firefighters about to arrive. Aziz and Finnell grabbed ladders off their bucket truck and hurried toward the people on the roof.

“The little boy was really scared,” recalled Aziz, who helped him down. A woman then descended the second ladder, followed by a man who Finnell said was “pretty badly burned.”

“There was a lot of smoke, and it got thick pretty quickly,” Finnell said. “By the time we got back on the ground, Abe and I were in a hurry to get some fresh air.”

Slack said the entire incident was over with in a “matter of minutes” and praised the responding Athens Fire Department crew for getting the fire out so quickly.

The linemen won their share of praise as well – from the individuals they rescued, bystanders and Athens UB Assistant General Manager Wayne Scarbrough.

“This really doesn’t have anything to do with AUB,” he said. “This was three guys in the right place, at the right time, who knew what to do.

“But it does serve as a reminder that people at AUB – and people who work at utilities all over the Valley – are your neighbors and friends. They work and live in their communities, right alongside the people they serve,” Scarbrough said.