Retired U.S. Navy Capt. Alan Bean, the fourth man to walk on the moon and keynoter at TVPPA’s 2011 Annual Conference, died May 26 in Houston, TX, at age 86. 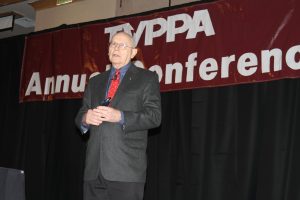 Selected for the astronaut program in 1963, Bean went to the moon six years later, aboard Apollo 12, then retired from the space program and the Navy in 1981. Painting had long been a hobby for Bean, but he made it his full-time, professional pursuit after his retirement.

Invited to deliver the keynote address at TVPPA’s 65th Annual Conference, Bean won a standing ovation from a packed ballroom at the Perdido Beach Resort in Orange Beach, AL. His presentation included a deftly crafted mix of space-program stories, images of his art and leadership lessons learned in space, but applicable at substations.

“It’s all about your team,” he said. “One of the things humans do well is to come together in teams to help one another. Apollo was an example of what humans can do and be if they try to do and be their best.”

Retired TVPPA President/CEO Jack Simmons recalled a conversation he had with Bean at Orange Beach.

“He told me that when he became an astronaut, he got a set of silver wings for his uniform,” Simmons said. “When he went into space, he got gold wings. He managed to smuggle the silver wings [onto Apollo 12].

“Then, when he walked on the moon, he threw those wings as hard as he could and watched them sail away. He said that when he looks at that part of the moon, he thinks about where those wings landed. We were all honored to have met him,” Simmons said.