Greg Williams wound up his historic run as TVPPA’s chairman in the best way possible – with TVPPA’s highest honor. 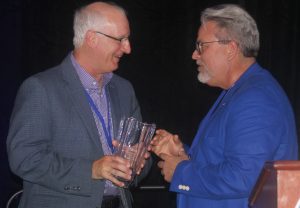 Only the second man in TVPPA history to serve three consecutive one-year terms as chairman, Williams received the Richard C. Crawford Distinguished Service Award May 22, during the 72nd Annual Conference. Williams was succeeded at the conference by Chattanooga, TN, EPB President/CEO David Wade.

Always the highlight of an Annual Conference, the 2018 Crawford DSA presentation was made even more special by the fact that Williams was surprised by his family, including his six grandchildren.

“You keep a great secret,” he told the estimated 500 in attendance for the annual Crawford DSA dinner.

Williams has been general manager and executive vice president at Appalachian EC, New Market, TN, since 2011. He’s been at the cooperative for 36 years, and serves on the Seven States Power Corp. Board of Directors. He holds undergraduate degrees from Carson-Newman University in Jefferson City, TN, and Georgia Tech.