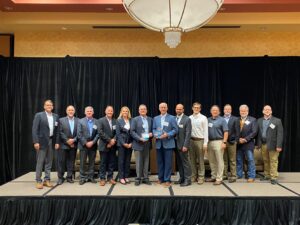 Presented by TenneSEIA (Tennessee Solar Energy Industries Association) each year, the award goes to someone outside the solar industry who moved solar in the Tennessee Valley forward by undertaking a significant activity that showcases a combination of innovation and leadership.

This year’s recipients exemplify this spirit of innovation and leadership through their partnership with Seven States Power to develop the first joint solar project in the Valley.

The two power companies worked to solve a pressing problem that can limit a local power company’s (LPC) ability to take advantage of options available through TVA’s Flexibility Program. While many LPCs have large loads and would like to take advantage of adding renewable energy generation sources to their mix, constrained access to appropriate real estate  restricts their ability to implement solar projects.

AEC wanted to find a way to offset some of their load and reduce energy costs while MUC has considerable industrial load with inquiries about Renewable Energy Certificates (RECs) from several companies that need assistance in achieving their carbon-reduction goals, driving their need for solar generation.

MUC and AEC combined their Flexibility loads for a larger, co-located array. Since larger arrays can produce power at a lower rate, this also provided a direct benefit to their ratepayers.

“As Jody and I began the search for a consultant, we realized we already knew a consultant who was familiar with our communities, with TVA and that we were already both part owners of… Seven States Power. So, we decided to tap into their know-how,” said Williams.

Seven States Power worked with MUC and AEC to identify the right vendor to build-out the 175-acre, 25 MW array as well as provided contract oversight and construction management for the project. AEC and MUC share a 50/50 split of the power generated by the facility that sits inside AEC’s territory with that energy being transmitted by MUC’s 69 KV line that originates near the solar array.

“MUC and our Chamber [of Commerce] view this as an economic development advantage in recruiting new industry and in promoting a community committed to protecting the environment,” said Wigington.

TenneSEIA believes this solar project provides a model for other local power companies across the Tennessee Valley. TVPPA members interested in learning more about how they can implement solar Flexibility projects of their own should reach out to TVPPA’s Solar Advisory Group liaison, Brad Rains.