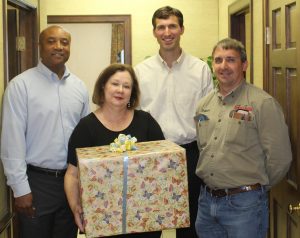 That Norma Kilgore has retired after 12 years as general manager at Natchez Trace EPA, Houston, MS, doesn’t begin to tell the entire story of her history at that cooperative.

Kilgore retired July 31 after a remarkable 52 years at Natchez Trace EPA; she started as a cashier in 1966, then went on to serve as plant accountant and finance/office services manager before her promotion to the cooperative’s top job in 2006.

Kilgore’s successor is Shawn Edmondson, who’s been Natchez Trace EPA’s system engineer for the past 20 years. A Vardaman, MS, native, Edmondson earned a two-year degree in accounting at Northeast Mississippi Community College and an undergraduate degree in electrical engineering from Mississippi State University.

Kilgore served at various times on TVPPA and NRECA committees, both developing policy and planning conferences, but what she overcame and achieved while working at Natchez Trace EPA makes her career all the more remarkable. She started work on a University of Mississippi undergraduate degree in 1982 and earned that degree in 1989. She endured the death of her husband, survived a bout with cancer, lost a son eight years ago and is raising his son.

“Our employees and board have benefited from the leadership of Ms. Kilgore and really appreciate the impact that she has had in bringing the Association to the position it’s in today,” Edmondson said. “There is no doubt that the Association has done well under her guidance.”