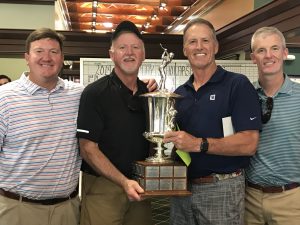 The foursome combined for a 13-under-par 59 at the Robert Trent Jones Golf Trail’s Schoolmaster course. The victors were one shot clear of Bill Rogers, general manager at Caney Fork EC, McMinnville, Tenn., and Steve Murphree, board vice chairman at Cullman, Ala., PB, who teamed with Keith Budlong of Fisher Arnold and TVA’s Jason Regg.

As ever, the event’s true winners were the Valley high-school seniors who’ll win college scholarships funded, in part, by the tournament’s proceeds. Tournament officials said this year’s Power Play drew 95 players and raised $9,000 for those scholarships, which are awarded each May to dependents of TVPPA-member utility staffers.

“It’s amazing to hear about all the accomplishments these young individuals have already made and their plans for the future,” said tournament official Dan Pratt, TVA’s vice president for customer delivery. “You recognize the talent we have in the Valley and are confident that our future is in the best of hands.”

Since its 1995 inception, the Power Play Scholarship Association has awarded more than 600 scholarships, worth some $2.3 million. Scholarship recipients are chosen by a team of college/university educators from across the Valley who weigh applications based on academic achievement, standardized test scores, leadership qualities, letters of recommendation and written essays.