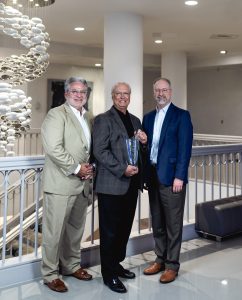 Rodney Boyd, General Manager & CEO of McMinnville Electric System (Tenn.), was selected by his fellow system managers to receive the 2022 Richard C. Crawford Distinguished Service Award in recognition of his contributions to TVPPA and for his efforts in upholding of the public power model in the Tennessee Valley. The award was presented during TVPPA’s 76th Annual Conference in Orange Beach, Alabama.

Established in 1980 and renamed in 2004 to honor retiring TVPPA President and CEO Dick Crawford, the award honors any CEO or General Manager of a TVPPA member system who has been active in TVPPA, as well as other Valley electric utility association activities, and meets these criteria:

Greg Williams, General Manager of Appalachian Electric Cooperative presented Boyd with TVPPA’s highest honor, noting his dedication, work ethic and calling him a trailblazer as he shared highlights of the innovative technologies Boyd adopted over his time leading McMinnville ES. Williams shared that Boyd had previously won the Governor’s Environmental Stewardship Award for spearheading a program to replace all of his community’s streetlights with LEDs and was an early believer in electric vehicles, installing the first EV chargers in his area approximately 10 years ago.

“This man has many qualities but one stands out more than any other, his quiet humility.  He has opinions, and he shares them without hesitation, but he is respectful, thoughtful, and always willing to engage in constructive dialogue,” said Williams.

He added, “Rodney has been a pillar of support for the public power model, working diligently on the Education & Training Committee for 18 years, six of which he was the chair. “

In addition to his work with our E&T committee, Boyd has also been an engaged member of the:

In accepting his award, Boyd humbly said, “As I realized that Greg was talking about me, the honor just washed over me. I literally got tears in my eyes. This is TVPPA’s highest honor and to think that I was selected by my peers makes this recognition very special.”