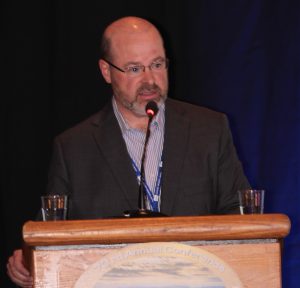 In its annual business meeting, conducted May 21 in Asheville, NC, TVPPA’s membership re-elected Bowling Green, Ky., MU General Manager Mark Iverson and Chris Jones, the chief executive at Middle Tennessee EMC, Murfreesboro, Tenn., to their seats on the board of directors. Iverson will continue as the municipal at-large representative, while Jones will serve as the ‘Big 8’ at-large cooperative representative.

Attendees heard a presentation on proposed bylaw changes from Jones, who also serves as chairman of TVPPA’s Bylaw Review Committee. The members later approved several changes Jones said “sought to clarify and enable a few things,” including the relationship between TVPPA’s CEO and the board of directors, signatory authority and succession.

The membership also approved a resolution, offered from the floor, opposing any 2019 TVA rate increase; such an increase would be TVA’s seventh in as many years.

“All we’re doing is asking TVA to take a breather and see what happens,” Carroll added.