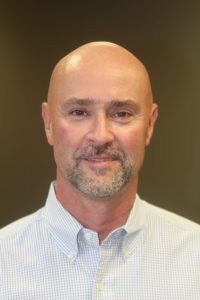 In signing on with TVPPA, Brad Rains is returning to public power.

“I look forward to working with Steve and Brad to put an array of projects before our members,” Wilson said.

Rains grew up in Marietta, GA, and earned his undergraduate degree in mechanical engineering from Southern Polytechnic University (now Kennesaw State University). He started his career at Atlanta GasLight, then joined the staff at North Georgia EMC, Dalton, GA, in 2001. After five years at North Georgia EMC, he went to carpet giant Shaw Industries as a plant engineer.

Rains said that, in coming to TVPPA, he’s scratching an itch he’s had since he left North Georgia EMC.

“That was the most fun I ever had in a job,” he said. “Utility work is in my blood, and I missed working in that environment.”