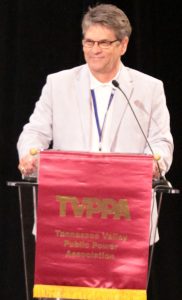 With his retirement, Burgess would close the book on a distinguished 34-year career in public power – the first 16 at PowerSouth and the past 18 at TVPPA.

“Phillip made countless improvements in almost every area of TVPPA operations during his 18 years here,” said TVPPA President/CEO Doug Peters. “I know I will miss him, as will those of you who’ve known and worked with him. There is no more passionate advocate for public power, and we owe him a debt of thanks for his service.”

Burgess earned his undergraduate degree in communications at the University of Alabama. He joined TVPPA in August 2000 as communications director. He later took leadership in government-relations and conferences and served as staff liaison to numerous TVPPA committees. He was named to his current position in September 2017.